Transforming Lives and Communities in Montclair 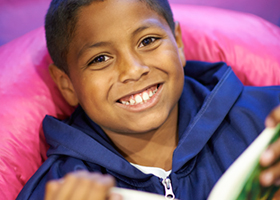 In the early 2000s, the city of Montclair identified the “San Antonio Gateway” as an area in need of redevelopment. The neighborhood consisted mostly of vacant lots, blighted duplex units, underutilized industrial and commercial land, and overcrowded multifamily development. According to census data, nearly 49 percent of area renters paid 30 percent or more of their monthly income on rent, the standard used by HUD to determine housing affordability. The average senior living in the area spent 55 to 65 percent of their monthly income on rent for a market-rate apartment. There was a great need in the area for attractive, well-maintained affordable housing for families and seniors. 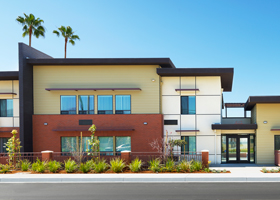 The goal of the city of Montclair was to affect dramatic positive change in the community through the development of much-needed quality affordable housing and implementation of social services that would improve the quality of life in the neighborhood. In 2004, the city entered into a development agreement with National CORE and by 2007, the 75-unit San Antonio Vista Apartments were constructed and opened. In 2009, National CORE became the first developer in California to combine a HUD 202 grant with tax-credit financing to build the 84-unit San Marino Apartments, serving low-income seniors. Vista del Cielo was opened in 2011, adding 50 two and three-bedroom units of award-winning housing. In 2014, the San Emi Apartments were constructed to provide 18-units of housing for developmentally disabled adults, complete with onsite services catered specifically to the resident population. 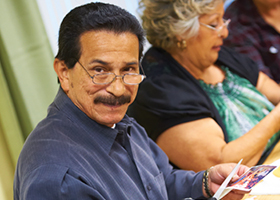 After retiring from her job as an office administrator with the Los Angeles Unified School District nearly 10 years ago, Patricia Roberts moved around, ultimately living with her son in the high desert community of Barstow. Last year, she moved back west and into National CORE’s San Marino Apartments in Montclair, her first time living in a senior community. “I’ve encountered nothing but positivity here for me,” Patricia said. She’s active in both the twice-weekly onsite exercise club as well as the community’s walking program, which monitors how many steps residents take during a week to encourage healthy lifestyles. She’s looking forward to participating in the community’s new fresh produce distribution as well as the onsite nutrition program. Patricia doesn’t have a car, so she takes the city’s free shuttle for seniors to the grocery store, the doctor’s office and the local library. “The staff here has been very helpful to me,” she said. “If I’ve needed something, they were right there. I’ve enjoyed it, I really have.” 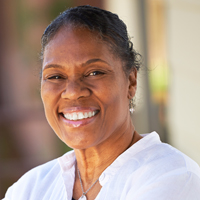 A single mother of five children, four of whom are 3 years old or younger, Jennifer Heynez doesn’t often have the time to plan for her future. Recently, Jennifer stopped by Hope through Housing Foundation’s Family Opportunity Center, which serves not only National CORE residents but other community members as well. She received information on grants for college and potential job leads, as well as encouragement to keep moving forward. “It helped me look at where I was at in my life and to see what step I can take next,” Jennifer said. “I felt more secure and motivated in pursuing what I wanted. Basically, it felt like I had support from somebody.” After taking four classes last semester, Jennifer is now 10 credits away from earning her high school diploma and is looking to continue her education to become an occupational therapist. “The medical field is a great place to get to know the people that need help,” she said. “I am looking for somewhere where I can help as well because I see how people have helped me.” 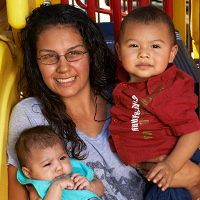 Two months ago, Shaneika Johnson was homeless, spending some nights in a shelter and others on the streets. She stopped by the office of the San Emi Apartments, which were still under construction, to see whether she qualified to live in the new community. Upon hearing about Shaneika’s living situation, National CORE’s staff contacted the local homeless services agency and arranged for an emergency hotel voucher until her apartment at San Emi was ready. “I never would have thought that I would make it back on my feet,” Shaneika said. “I never would have thought that there were people out there that could help me get out of the situation I was in.” Now with a new apartment and the encouragement of the staff at HOPE’s Family Opportunity Center, Shaneika is hoping to go back and finish school so that she can help others the way she has been helped. “It’s not easy but I just want to make a difference in the world,” she said. “I know that I’ve got a great team behind me and there’s got to be something in me that can help.” 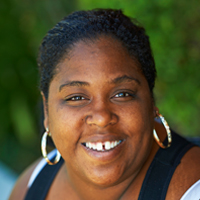 Our Work in Montclair

Ongoing revitalization effort, beginning with the opening of San Antonio Vista in 2007

30 to 60 percent of Area Median Income

Building the Future of Community