A Life Transformed: Finding a Secure and Supportive Home After Years on the Streets 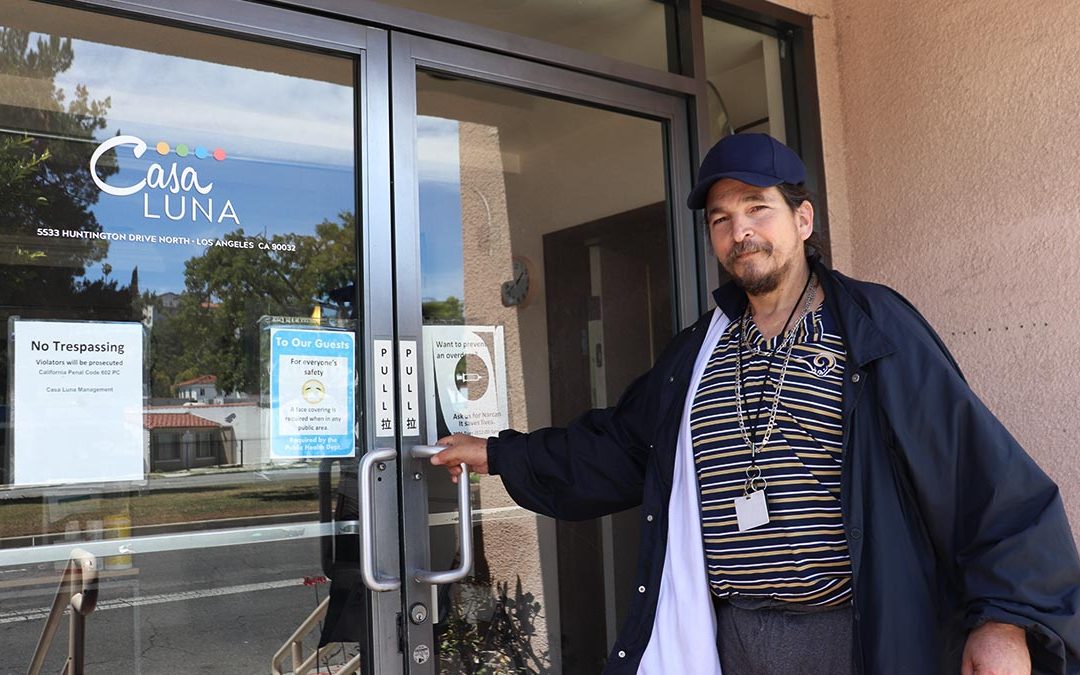 Ivan recalls a “great young life” in Highland Park, joining friends on adventures along “the horse trails all the way to the Rose Bowl” and at the “little ponds in between where we could catch tadpoles and frogs.” In those days, he spent as much time as he could outside.

It was while working as an armed guard for luxury brands like Rolex and Mont Blanc that Ivan discovered he suffered from early-onset cataracts. It caused his vision to blur and prevented him from being able to do his job. He was laid off and told that his job would be waiting for him when he was able to come back. But it took four months to recover from cataract surgery. When he went to resume his old position, the company only provided part-time work at a reduced pay.

“That’s how I lost the house, I couldn’t pay the bills,” Ivan said. “It just got harder and harder by the day.” Ivan had no choice but to spend every day and every night outside on the streets, just blocks away from where he had grown up.

Five hard years later, Ivan is still in Northeast LA. But now, he has a place to call home.

Less than a year ago, he moved into Casa Luna, a former Super 8 Hotel that National CORE and Union Station Homeless Services turned into permanent supportive housing through the State of California’s Project Homekey program.

Ivan is very grateful to be living at Casa Luna. “The staff is amazing, they’re on top of everything,” he said. “You mention one thing – you need something, they’re always there for you.”

Housing aside, Ivan feels grateful to even be alive at this stage in his life. In his teen years, he saw nearly all his childhood friends get involved in gangs, with no turning back. “I never got into the gang activities. I’m amazed that it didn’t happen because it happened to all my other friends,” Ivan said.

Just as his friends were getting involved with gangs, Ivan left for Peru for six years. “When I got back, I asked about my friends. Either they were locked up in jail or they were dead.”

If he hadn’t left Highland Park during those critical years, Ivan believes he would have faced the same fate.

After his five-year struggle with homelessness, Ivan has been able to start working again. Like many other Project Homekey residents, he’s made the most of the security and stability that comes with having a safe place to return to after a long shift. He is now an overnight security guard at an apartment complex, working from midnight until 8:00 a.m. – “full-time, which is great.”

Ivan said that when he finally had a place to call home, it changed everything. “After five years waiting, I was finally inside a room and got to sleep on a bed. I was so happy,” he said. “It was amazing how fast it worked out for us.”