A Life Transformed by Crestview Terrace 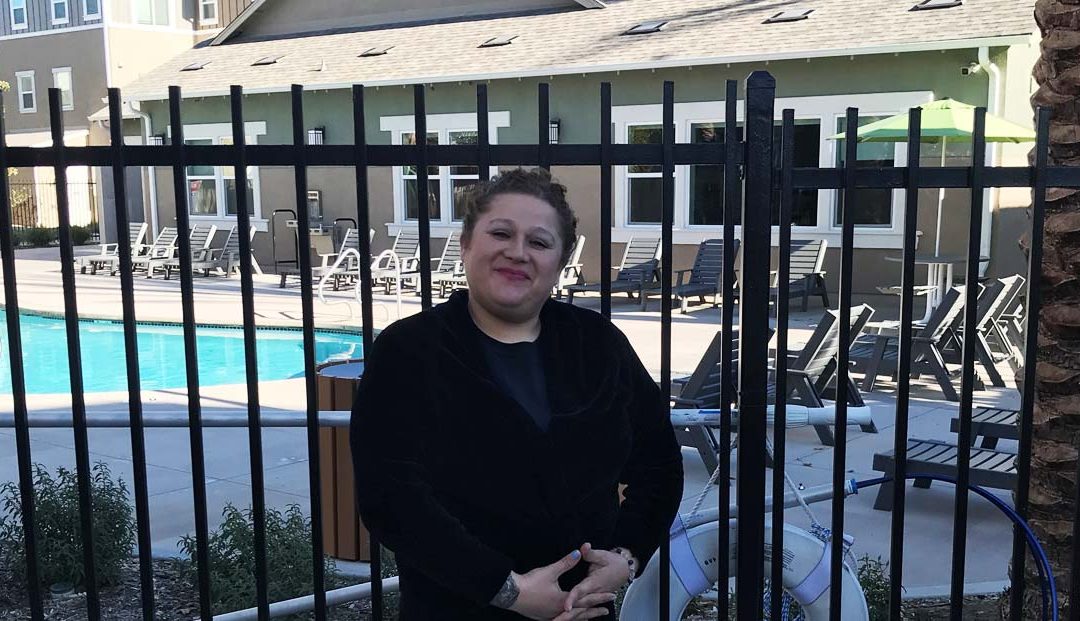 After Years of Struggling to Afford Rent, A Caregiver, Single Mother, and Community Volunteer Starts a Hopeful New Chapter

For most of her life, Ruby, a single mother of two, has been struggling to find stable housing in the midst of skyrocketing costs. She has been forced to constantly uproot her family to move again and again throughout the region in search of more affordable rents, from Victorville to San Bernardino. Now, after moving into the new affordable housing community of Crestview Terrace in San Bernardino, she has finally been able to take a breath. Ruby has spent years looking after others – she works as an in-home caretaker for seniors while raising two kids and volunteering at the Frazee Community Center in San Bernardino, providing hot meals, clothing, and assistance to people experiencing homelessness. Since moving into Crestview Terrace, she has been able to take much-needed time to take care for herself.

Ruby’s housing struggles began when she was in the eighth grade. She remembers the first time vividly: a long car ride from her childhood home to her aunt’s in Fontana. Her grandparents had achieved the American Dream – they had worked hard, bought a beautiful home, and left it to their seven children. But some of the children, already homeowners, decided to sell the family home, leaving Ruby’s mom with few options. Housing insecurity became a part of Ruby’s life at a young age and, despite her best efforts, is something that continues to impact her ability to move beyond poverty.

Ruby has watched the Inland Empire – a region that offers the most affordable rents in Southern California – become far too expensive for the income of a single parent. Several years ago, she moved into a three-bedroom house in Highland that was $800 a month, with water and garbage bills included. When the owner sold the property, the new, real estate-minded owner raised the rent to $1400 and gave Ruby and her family a 90-day notice to pay or quit.

It took them several months to find a new home. Ruby looked everywhere for housing she could afford, and the application fees started adding up. When they found a one-bedroom in San Bernardino for $825 with no utilities included, she saw it as a blessing, even though it was more expensive and they had lost two bedrooms, making her family’s everyday lives feel much more crowded. They were just happy to have a place they could afford. But there, too, the rent kept rising every year – by the time they had to leave, rent was $1000.

When Ruby was offered an affordable home in Crestview Terrace, she jumped at the chance. But her heart sank again when she learned she had been placed on the second floor. Due to chronic muscle and nerve damage, she knew she would not be able to climb the staircase every day. Ruby was grateful to learn within a few weeks that the Crestview Terrace team had found her a first-floor home. She moved into her new two-bedroom with her 13- and 14-year-old kids, basking in the extra space. “My situation – It’s a big help,” Ruby said. “Living with children, you get that extra space as well, the room for the kids. That helps.”

At times, living in a new building has made Ruby nervous – she doesn’t want to leave scratches on the bright new white walls. But mostly, it leaves her feeling grateful. She is thankful for each of the high-quality, new appliances that the apartment came with and how they make her daily life that much easier – the microwave, the refrigerator, the dishwasher; the in-unit washer and dryer, which saves the extra trip to a laundromat or a community laundry room.

Things are starting to get better for Ruby, but she still has daily worries. In the week that Ruby and her family moved in, they were experiencing food insecurity. It was around Christmastime, and at a Breakfast with Santa event at Crestview Terrace, Ruby learned that National CORE’s residential services partner, Hope through Housing, offers programs and support for all families living in National CORE communities. She was reluctant to ask for help, even though she needed it.

“I didn’t want to take advantage. You feel like, ‘oh, but I need this,’ but you don’t want to take advantage,” Ruby said. Eventually, she reached out to Hope through Housing service coordinator Jennifer Cervantes. Jennifer told Ruby not to worry – Hope through Housing would make sure her family had enough to eat. “It wasn’t like ‘hey, we can’t get this, no – you’re asking for too much.’ It was like what kind of brand do you need?’”

Jennifer took great care to provide the right groceries for Ruby’s family – down to the right percentage of milk. A few months after we first spoke, Ruby said she’s been doing a lot better. After months of waiting, she finally has been able to qualify for pandemic EBT, which has made it manageable to make ends meet. She said that living at Crestview Terrace has even helped her quit smoking. “My doctor has been telling me to slow down and stop for years,” Ruby said. Crestview Terrace, like all National CORE communities, is smoke-free. “We can’t smoke here,” she said. “So, it makes me not smoke!”