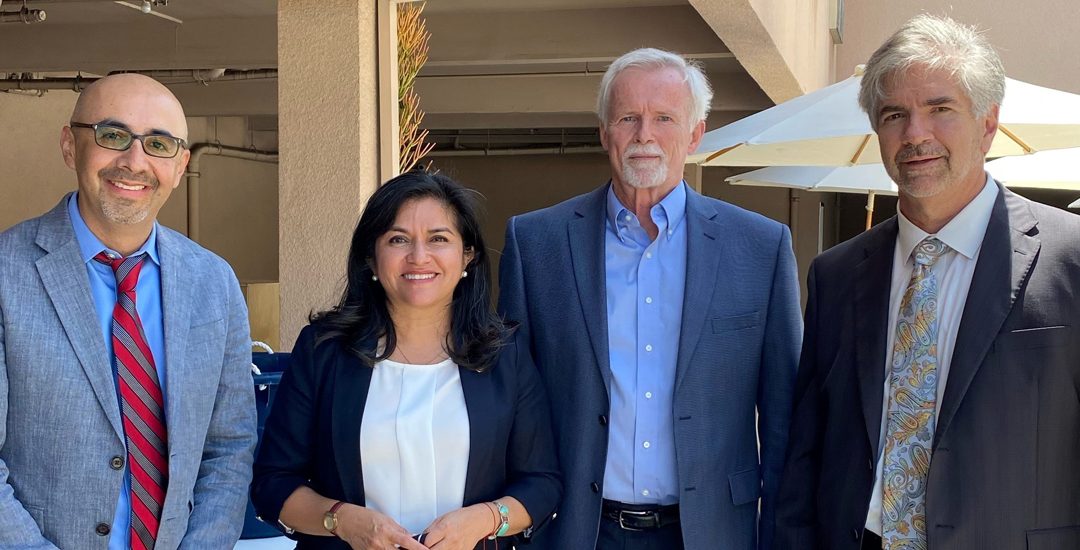 LOS ANGELES, Calif. – On May 26, three preeminent officials in California and Los Angeles’ housing agencies visited Casa Luna, one of two former hotels on Huntington Drive in Northeast LA that National CORE, in partnership with Union Station Homeless Services, the City of LA, and the State of California, has converted into over one hundred units of transitional housing for individuals experiencing homelessness. Most of the new residents of Casa Luna (formerly the Titta Inn) and the other transitional housing site, Huntington Villas, a former Super 8 motel, just a few blocks down the street, were previously living in a tent city on a median strip just outside the vacant hotels. Funded by California’s pandemic-born housing initiative, Project Homekey, which fast-tracks the conversion of vacant hotels into temporary housing, National CORE bought, rehabilitated, and now manages Casa Luna and Huntington Villas, while Union Station provides wraparound services.

After touring Casa Luna and meeting two residents, who shared the immense impact that the housing has had on their lives, the guests – California’s Business, Consumer Services & Housing Secretary Lourdes M. Castro Ramírez and Housing and Community Development (HCD) Director Gustavo Velasquez, and Douglas Guthrie, President and CEO of the Housing Authority of the City of Los Angeles (HACLA) – each remarked that Casa Luna is proof that California could swiftly find housing for many of its more than 150,000 residents experiencing homelessness by using the Project Homekey model.

Governor Gavin Newsom originally introduced the Project Homekey initiative as Project Roomkey, an emergency housing measure that gave unhoused Californians access to vacant hotel rooms to reduce the threat of COVID-19 spreading rapidly among the Californian homeless population. The initiative was rebranded as Project Homekey when the Governor determined that the Project Roomkey transitional housing should be turned into permanent supportive housing. National CORE will have the honor of converting both sites into more than 200 units of permanent supportive housing in three to five years. For now, Secretary Castro Ramírez said it was important for her and her colleagues to visit the site, meet residents, and see that providers like National CORE and Union Station are using Project Homekey to truly transform lives.

“It really matters to us to hear directly from the residents,” Secretary Castro Ramírez said. “It gives us the stories, the information, and the knowledge to go back to Sacramento to keep fighting for more.”

HACLA President Doug Guthrie said that because of the success of sites like Casa Luna, the City of LA is now considering expanding Project Homekey by three times its current size, even as the pandemic improves. Guthrie and Castro Ramírez specifically touted the speed with which National CORE and Union Station got the sites up and running and the strong partnership and collaboration displayed by the two nonprofits.

“What you guys [National CORE and Union Station] are doing is outstanding,” Guthrie said. “There could be a lot more acquisitions like this throughout the city.”

“You said something that was so important – ‘the people here believe in supporting each other,’” Secretary Castro Ramírez said while talking to a resident. “And that’s what I think we all have been trying to do through this pandemic. To support each other, to support individuals who for whatever reason didn’t have a place to come home to, and to realize that we have the ability to come up with different ways of solving these issues.”

About National CORE
National Community Renaissance, based in Southern California, is one of the nation’s largest nonprofit developers of award-winning affordable housing. National CORE manages nearly 9,000 affordable, senior, and market-rate units in California, Texas, and Florida. National CORE’s strength is in its ability to offer partners an array of in-house capabilities that navigates the complexities of planning, developing, building, rehabilitating, managing, and providing supportive services. For more information on National CORE, please visit www.nationalcore.org.

About Union Station Homeless Services
Union Station Homeless Services is a 501(c)(3) nonprofit organization that is committed to providing permanent solutions to end homelessness and rebuild lives. Headquartered in Pasadena, Ca, Union Station is the San Gabriel Valley’s largest social service agency assisting homeless and very low-income adults and families. Union Station Homelessness Services has been in existence for almost 50 years. We are the lead county agency for SPA 3, coordinating homeless services in 32 communities, with a combined population of over 1.5 million across the San Gabriel Valley. Our mission is guided by the belief that everyone deserves a life of dignity and a place to call home.  For more information, visit www.unionstationhs.org.