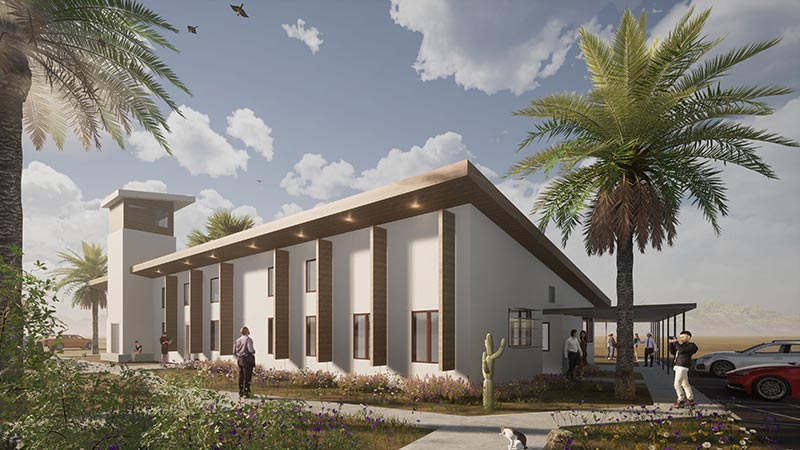 After nearly 24 years, National CORE celebrates closing funding for the extensive renovation of Cathedral Palms, one of the organization’s oldest affordable housing communities, located in Cathedral City. “This renovation has been in the works for years,” said President and CEO Steve PonTell. “National CORE has remained committed to finding the necessary funding to maintain the affordability of the housing and the quality of the apartment homes for our senior residents.”

Ever since acquiring the community in 1996, National CORE has been developing plans to revitalize the 1950s-era development. However, because of limited funding sources for affordable housing in the region and the elimination of redevelopment agencies in California in 2012, efforts to revitalize the community became an impossible dream. Ironically, it was during the COVID-19 crisis that National CORE was finally able to bring together public and private partners to make the dream a reality.

The rehab for Cathedral Palms will include a major renovation of all 224 apartment homes, with 68 homes set-aside for supportive housing, funded by the State of California’s HCD/No Place Like Home Program, as part of its efforts to mitigate the growing homelessness crisis in the Coachella Valley. In addition, a new 3,500 square feet Community Center will be built to serve as a hub for resident services and activities.

Construction has begun and will continue in phases to minimize disruption to existing residents and includes temporary relocation coordinated by National CORE’s in-house relocation team. Construction should be completed by late 2021.

Funding sources for the redevelopment include the State of California’s HCD/No Place Like Home program, which awarded the County of Riverside and National CORE $7.7 million for 68 units of provisional supportive housing. The County of Riverside Housing Authority is providing 74 project-based vouchers, and the Riverside University Health System-Behavioral Health is providing wraparound services for residents living in supportive housing. Additional funding partners include the City of Cathedral City, JPMorgan Chase, and Red Stone Equity Partners.