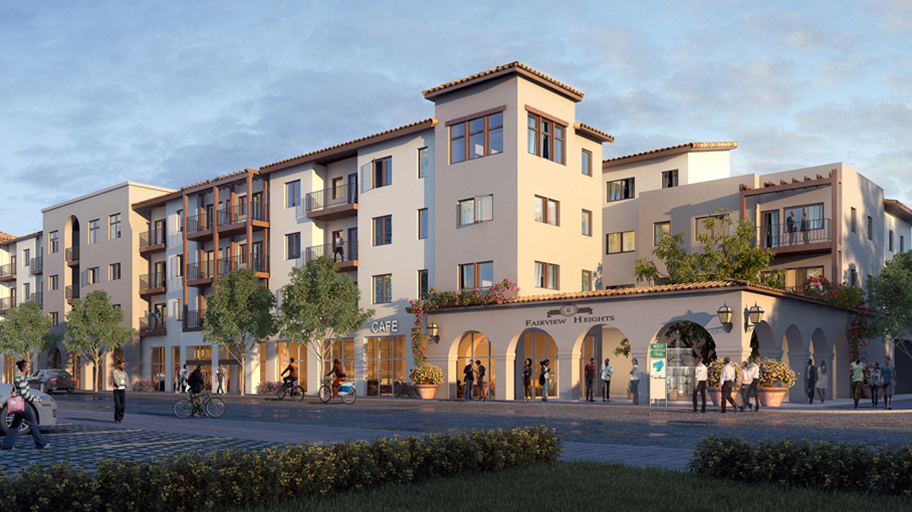 Co-developers Linc Housing and National CORE, both California-based nonprofits, will join Los Angeles County Supervisor Mark Ridley Thomas, Inglewood Mayor James Butts, Jr., and other partners to celebrate the start of construction at the site of Fairview Heights. The all-new affordable housing apartment complex will bring 101 one-, two- and three-bedroom homes to Inglewood, including 50 units for people who have experienced homelessness, 50 units for households earning between 30 and 80 percent of the area median income, and one manager’s unit.

The two new four-story buildings will feature Spanish-style architecture with open spaces to promote resident interaction. The complex will have on-site parking, bike storage, community room with computer lab, offices for case management, tot lot, and an outdoor courtyard with a picnic area. Partnership with the Los Angeles County Department of Health Services will allow Linc and National CORE to serve the 50 formerly homeless households with intensive case management services, while all future residents will have access to life-enhancing services through Linc’s resident services program.

The ground level will have 5,000 square feet of commercial retail space to create opportunities for local businesses and community organizations. The location is in walking distance to surrounding community amenities, including the nearby Edward Vincent Junior Park and the Fairview Heights Metro Station due to open later this year.

Fairview Heights incorporates a variety of energy efficiency, water conservation and sustainable building features that promote healthy living and help residents reduce their utility expenses. The new community was designed by KFA Architecture and will be built by National CORE’s construction division. The development is due to be completed in late 2021.

– County and city officials, the National CORE/Linc Housing team, and other partners celebrating the start of construction, including a photo opp in front of construction equipment