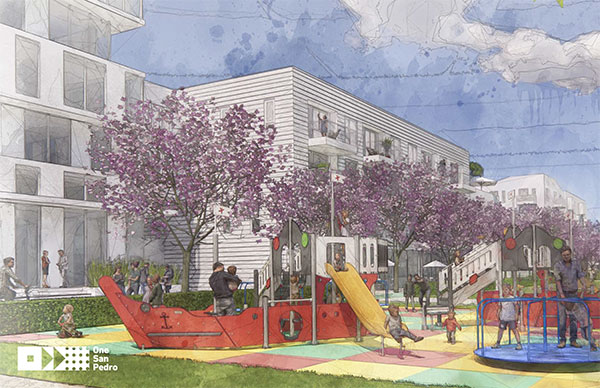 This April, the One San Pedro Alliance released its annual report, recapping a year of strong progress in grassroots planning for a huge neighborhood revitalization effort spurred on by the 2015 San Pedro Community Plan.

A central part of the project is the transformation of Rancho San Pedro, a 21-acre, 79-year-old public housing site adjacent to the Port of Los Angeles and Downtown San Pedro that is owned by the Housing Authority of the City of Los Angeles (HACLA). For nearly three years, National CORE and its development partners, The Richman Group and Century Housing, have worked with residents and HACLA to plan out the transformation of the site, which is still home to hundreds of families in 478 apartment units. The reimagined One San Pedro will offer 1,390 apartment homes to the current resident families and many more. In a neighborhood that badly needs affordable housing, apartments will be leased at all levels of affordability, and 77 will be set aside for affordable and market-rate homeownership.

One San Pedro’s guiding mission is to create “a safe, thriving, mixed-income neighborhood that will serve as a model for other revitalization efforts by building on its existing assets to create high-quality housing options, neighborhood-serving retail and economic activity, parks and recreational opportunities, walking and biking streets, and a variety of supportive services.”

A central priority throughout the project has been to ensure current Rancho San Pedro residents and local community members guide One San Pedro’s ambitious plans at every step of the way. In addition to planning by an elected resident advisory council, input and feedback has been gathered from other residents at over 100 events, including barbeques, ice cream socials, and holiday giveaways. Although National CORE joined the project as a developer, our talented and experienced development team has taken on a large role in outreach and community engagement.

For now, the project continues to reach new milestones, including receiving approval from federal and local agencies for the project’s Transformation Plan, developed through collaboration between residents and the Alliance. The Environmental Impact Report/Statement process for the development was also initiated this April.